Closely resembling screws, Stainless Steel 304 bolts are a kind of fastener having an external male thread. Bolts, just like screws are available in a wide variety of head designs. Frequently used to make a bolted joint, the SS 304 hex bolt in combination with the nut applies an axial clamping force. Also, the shank of the SS 304 fasteners bolt acts as a dowel, which them pins the joint against sideways shear forces. 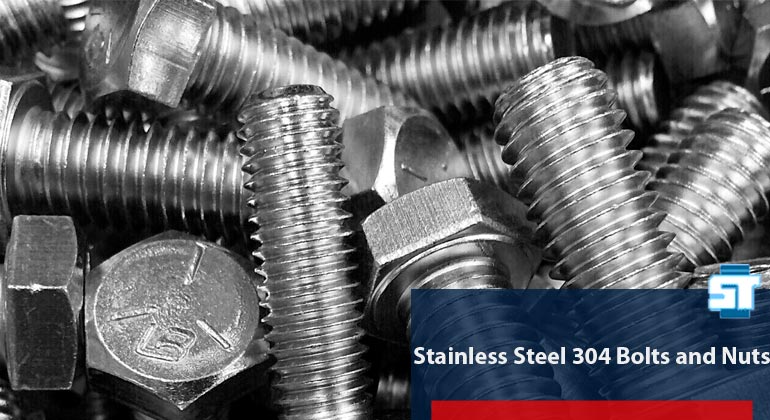 These SS 304 stud bolts have been created with the intension of engaging the tool used to tighten them. Furthermore, some kinds of bolt heads tend to lock the bolt in place. Which is why these bolts are arranged in such a manner that it does not move along with a tool required only for the nut end. ss 304 nut bolt manufacturer produces many forms of bolts from them, the most commonly seen bolt heads include slotted hex washer, hex and socket cap. Being a very popular choice, the SS 304 nuts are available across the globe at a very economical cost.

Contemplated to be stronger than castings, the SS 304 forged rings has an added advantage because the grain flows of the alloy 304 have been altered, thus conforming to the form of the part. Hence, the ASTM A193 grade 304 bolts are often selected to be used for applications involving either high pressure or/ and high temperature environments.

How to test 304 Bolts before you buy

While purchasing stainless steel bolts from an unknown supplier is always risky, as a buyer one can take prevent the purchase of counterfeit bolts by practising a few cautionary measures before the actual purchase. Apart from purchasing grade 304 stainless steel bolts from suppliers, one could always ask for test reports of these bolts. The test reports must not only contain the chemistry of the bolts, but also the values of certain mechanical tests performed on a few specimens of that batch. For instance, both ASTM A320 as well as ASTM A193 are standards that require the bolts to conform to the tensile strength, elongation, Rockwell hardness and yield strength requirements. While unauthentic suppliers are known to regularly forge these test reports another simple test that could be performed on the grade 304 stainless steel bolt is a torque test.

However, all being said and done, getting a certified test report from a laboratory is considered to be the standard protocol while choosing these bolts for use in critical applications. Moreover, the test procedures conducted on the samples in the lab are checked with the latest technology and would yield an appropriate result. In addition to this, a laboratory would have many kinds of equipment at its disposal. Hence, performing tests such as the Axial and Wedge Tensile Test, Hardness Test, Shear Test, Proof Load Test, Hydrogen Embrittlement Test, Copper Sulfate Test, Torque Test, coating Thickness, Rotational Capacity, Total Extension at Fracture, Interlocking Test, Reusability Test, Fatigue Test, as well as the Push Out test.